The ASABE Student Robotics Challenge provides a stimulating and fun hands-on learning experience for undergraduate and graduate students to learn and demonstrate their knowledge and skills in agricultural robotics. For 2019, the challenge, to be held during the ASABE Annual International Meeting in Boston, Massachusetts, July 7 to 10, 2019, will simulate autonomous management in a plant nursery.

The details about the rules of the competition are below. You can submit all of your questions about the event and challenge rules here: https://goo.gl/forms/g0XJDt9AgYKqLIMB2

Objective: To correctly identify, arrange, and fertilize (advanced only) the most nursery plants in the shortest possible time in a match against another team.

Environment: A plant nursery environment will be simulated on a symmetrical 16ft x 4ft playing field.

Both the advanced and beginner divisions will have a playing field that is 16ft x 4ft and are only allowed to use one robot to compete in the challenge. Below are the layouts for the two divisions. There are 21 simulated pot-plants on the board and robots need to identify them and transport them to the storage area. One pot,  called the “Golden Pot,” will be placed in the center of the board and will have extra points for the robot that collects and places it correctly. The competition will be divided into a “Beginner” and an “Advanced” division. The beginner division is mainly geared towards undergraduate students with limited coursework in programing or microprocessors, while the advanced division is targeted towards upperclassmen and graduate students majoring in engineering. There will be black tape (as indicated below) on the board to aid the beginner teams with navigation.

In this tournament, each team will have ONE robot which will start from one corner and the robot from the opposing  team will start on the same wall, but on the opposite side (as shown in the images above). The robots should be able to work on either side of the board, since each team’s starting position will be unknown before each match. The maximum size for a robot is 12” by 12” by 12” at the beginning, although robots will be allowed to expand after the preliminary measurement and after the match has begun. Robots are allowed to take pots from the opponent side after they collect all the 10 pots on their own side plus the golden pot. The distance between plants (the centers of the pots) and the south edge of the playing field is 10”. The height of the walls around the board are 5”. For the advanced division, the north wall is taller (12”) to accommodate the two shelves of the storage area.

On the board there will be 21 total pots, 20 green/red plants (and also healthy/stressed plants for advanced division) and 1 golden pot. All the plants will be randomly placed with exception of the golden pot that will always be placed in the middle. All plants will face the same direction with the leaves parallel to the south edge of the playing field. The golden pot does not have a specified storage area and depending on the color of its plants (red or green) it should be transported to the right storage area. The first team to get the golden plant and correctly place it in the storage area will receive extra points (see Scoring). Teams are required to move all 10 of their assigned plants to the storage area before attempting to move the golden plant.

For the beginner division there are two types of plants, red and green plants, all with four leaves. 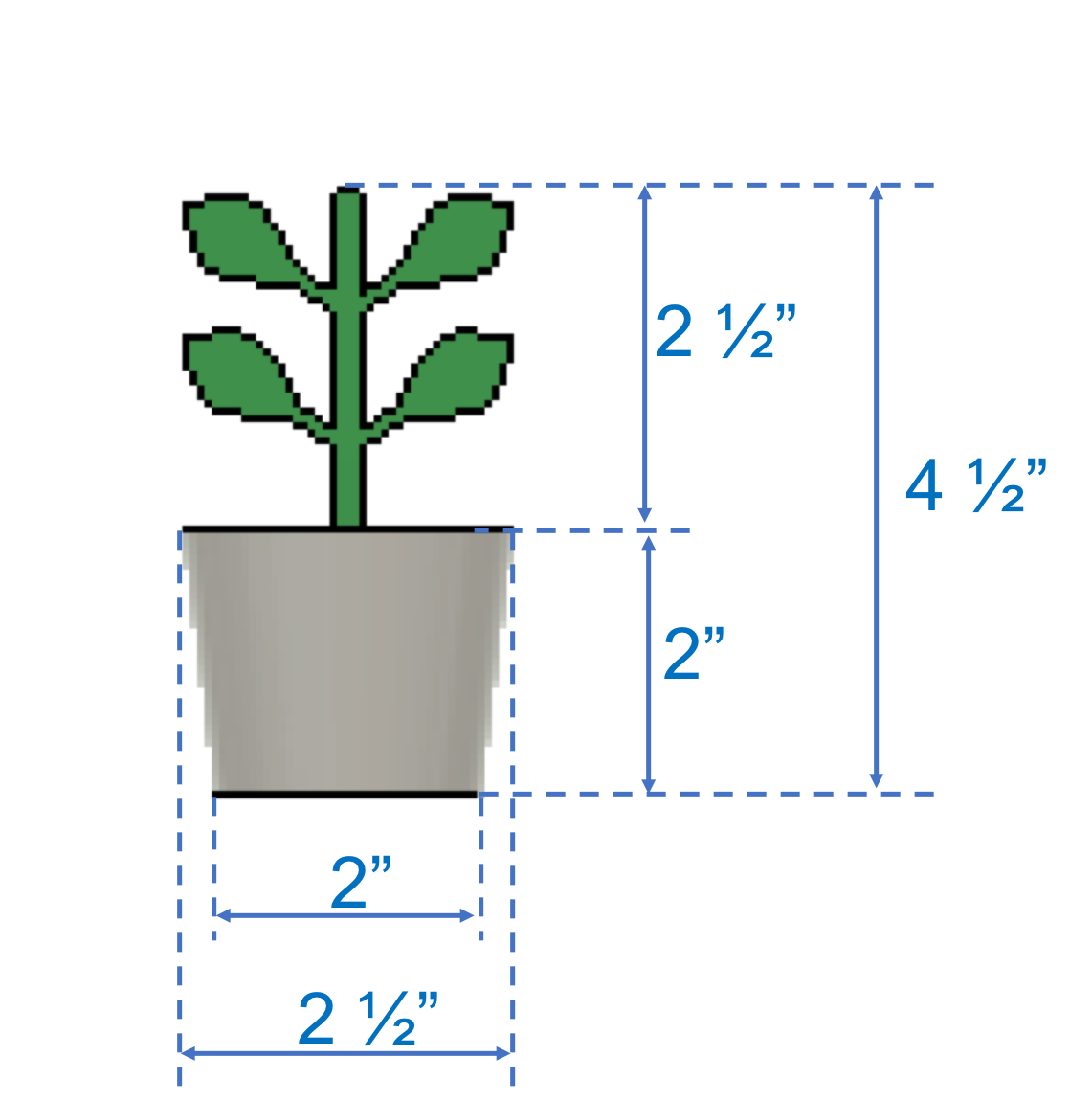 There is an additional golden pot that is in play, which both teams can move but are not required to. The board for the beginner division has black lines available for guidance and navigation, if the teams choose to use them. The overall goal is to find the plant, distinguish if it’s red or green, and place it in the correct storage location. The match will last for five minutes or until all pots have been moved, whichever comes first.

Matches will be won based on the number of points each team scores in that match. Equal match scores will be treated as ties in the match. Points will be earned as follows:

This division is designed for upperclassmen and graduate students majoring in robotics or remote sensing or who are experienced in programming. For the advanced division, there are two types of plants, red and green, as in the beginner division. However, the number of leaves per plant will vary: plants with four leaves will be identified as healthy plants while plants with two leaves will be identified as stressed plants. Moreover, the arrangement of the leaves in stressed plants will vary. Examples of the possible arrangements are shown below. The advanced robots need to identify the type of plant (color) and monitor them for stress (number of leaves). If stress is detected in a plant, the robot will need to apply fertilizer before, while, or immediately after, placing it in the storage area. Stressed plants should be placed on the lower shelf (same plane as the board floor) while non-stressed plants should be placed on the top shelf.

The target for the robot is the black pot (or golden pot) with a red or green plant. The robot should be able to detect the plant type based on its color, and check whether it is a stressed plant or a healthy plant based on the number of leaves. If it is a healthy one, it should be stored on the healthy shelf which is the top shelf. If it is a stressed one, the fertilizer should be applied to the stressed plant and it should be stored on the lower shelf. There is no aid line for robots in the advanced division and robots should be able to navigate without any guideline, except for the black line where the pots are initially placed. Each team should bring their own materials to represent fertilizer. The materials used as fertilizer should be in spherical shape with diameters limited to the range of 5-8 millimeters, in any color excluding black. One example of such a material is airsoft pellets. The committee will provide white, 6mm airsoft pellets for any teams that want to use them during the competition. These pellets can be ordered from this link: 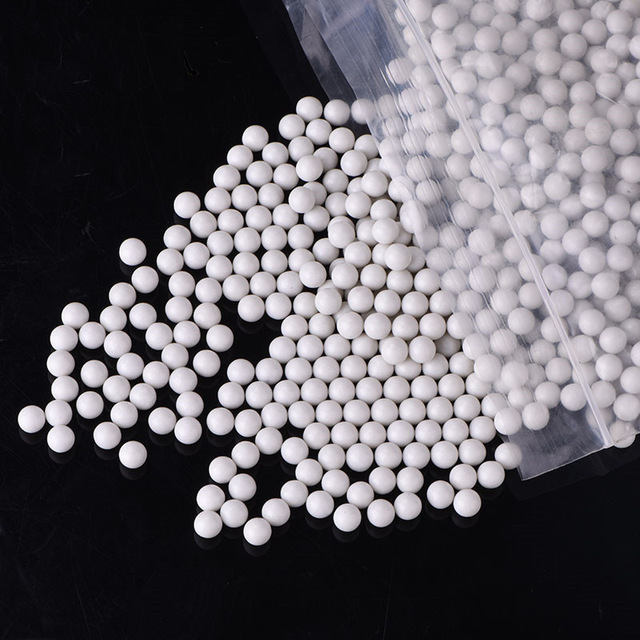 Picture showing airsoft pellets, an option for teams to use to represent fertilizer

The match will last for five minutes or until all pots have been moved, whichever comes first.

Robots will be scored based on their performance correctly moving and fertilizing plants based on plant type and plant health. Matches will be won based on the number of points each team scores in that match. Equal match scores will be treated as ties in the tournament. Points will be earned as follows:

The type of tournament will be decided based on the number of teams registered for each division of the competition. If an adequate number of teams register, the tournament will be held in a two-stage tournament: the group stage followed by the knockout stage. In the group stage, teams compete within groups of four teams each, so all teams will play at least three games in the group stage. Two teams from each group will advance to the knockout stage which is a single-elimination tournament. The final and third-place matches will determine the champion, runner-up, and third-place teams. Other types of tournaments will be considered if the number of registered teams in either divisions is not adequate for a two-stage tournament.

Devices such as consumer-grade computers, laptops, NUC-like devices, smartphones, tablets, or gaming devices may not be integrated into robots for the 2019 competition. Wireless communication with the robots is completely outlawed. Following are the metrics that will be utilized per processor and RAM restrictions:

This year we will have 2 robots from 2 different teams compete simultaneously on the same board. We expect teams to play fairly and uphold sportsmanlike conduct. If a team is found to  deliberately interfere with the other team’s robot or target during a time trial and the judges and committee decides there was foul play, there will be immediate disqualification from the tournament.

All teams must participate in the poster session to be eligible to compete. Teams must display a poster which details the function, design and specification of their robot. Posters must be 24-inches wide and 36-inches tall and include the following information:

You may include additional information if you like, but the above items must be present.  A poster session (max two hours) will be held prior to the competition on Monday July 8th, 2019. At least two team members must be present during the poster session. Once the session is over, teams will hang their posters at their assigned workstation.

The poster session will be a time for competitors to use technical and communication skills to interact with the various companies and universities attending the ASABE AIM. Please use this opportunity to showcase your skills and talents to potential future employers.

Prizes will be awarded for the top three teams in each division. A prize will also be awarded to the best poster, as determined by the judges. Prize details and amounts will be forthcoming.